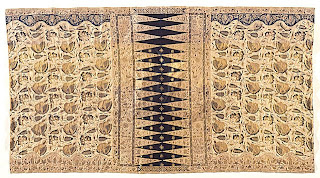 This probably was a wedding gift. The unusual amount of gold decoration and the choice for the more appropriate light border to remain visible at the lower, gilded edge suggest its use by a Peranakan bride. The kelengan (blu-and-cream) border as a covering for the lower body, that is, the womb, may well have been intended to impart protective properties. A second possibility is that the cloth was meant to be worn at festive occasions by a grandmother. Not only are the dark tones and predominantly old-fashioned style of the cloth appropriate for an elderly woman, the separate rows of fruits and flowers can also be seen as a metaphor for a grandmother’s position as the source for several successive generations (Marie et al., 1993).

Marie et.al (1993). Tilling the Cloth and Weaving the Land: Textiles, Land, and Regeneration in an East Javanese Area. (Basel: Museum of Ethnography).