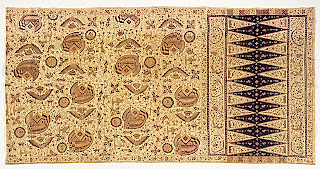 Highly abstracted resettes were suitable for Muslim Sumatrans, who used cloths such as this as part of the bridal gift of ceremonial dress. The venomous centipedes provide protection during momentous changes in life. On the north coast the banji (swastika) motif had similar apotropaic functions and was found carved on doorposts. In this case it forms a protective barrier for the bride’s lower body. According to Chinese belief, it also functioned as a harbinger of prosperity and progeny. Birds, creatures of the sky, in one end section contrast wtih jellyfish, creatures of the sea, in the other. Thus placed, they symbolized concepts were probably largely unfamiliar to Sumatrans. To them the golden embellishment was the most important aspect of the cloth, an indication of its use by the ratu sehari, the bride who was “queen of the day.”