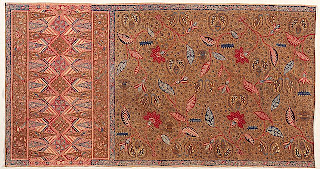 The semen motif, originally restricted to members of Surakarta court, was adapted for wear by outsiders. A clotch such as this, intended for an alluent, middle-aged Peranakan client, would have indicated she was part of a family network with branches across Java. The elaborate and most expensive of style would have engendered pride of ownership on later hands.