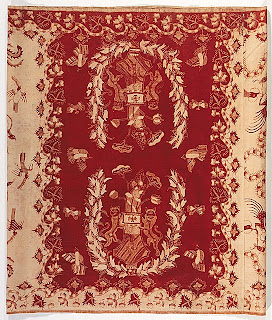 The motifs of this interesting cloth are depicted in Europeanized style and combined with Peranakan and Pesisir elements. The cloth seems to depict a confrontational universe, not only among predators and their prey—the peacock and the worm, the snake and the bird—but also intraspecies—the gamecocks. The chickens alone move freely, being the only species that are reputedly immune to snake venom (Elliott, 1984). Apotropatic and medicinal powers are represented by the centipede and turtle. This powerful cloth may have been worn by a male of mixed descent who had overcome many of life’s difficulties. The fanciful coat-of-arms evokes the crests found in the four corners of Indian export textiles and on the carriage doors of Batavia’s wealthy citizens. Many Europeans, the black sheep of aristocratic families as well as those of lowly birth, passed themselves off as aristocratic scions once they had made good.