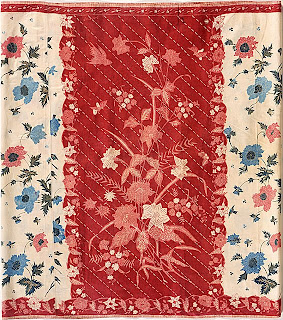 Although she could neither read nor write, at an early age Tan Ien Nio learned batiking from her mother. When she started a small workshop with three batik makers, her husband taught her to write her signature with the canting. Her designs are in the European manner and display a strong, original style. When she closed her workshop in 1930, she still had only a few batik makers in service, and these were taken over by her daughter Jacqueline (Mrs. Arthur van Ardenne), who continued to produce batik, despite the Depression, untul 1835. Mrs. Simonet’s house was sold to the Ursuline Sisters, who built a girls’ school on the property, while she herself moved to Bendan Street in the southern part of Pekalongan and died there in 1937.

Source: Batik from the North Coast of Java