The Masterpieces of Batik Peranakan Made by The Tie Siet Workshop 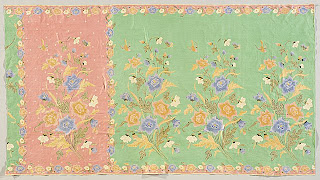 One of the most important Peranakan Batik entrepreneurs in Pekalongan was The Tie Siet. He ran his business from about 1920 until the 1950s. Around 1930 he introduced various extremely crowded backgrounds, composed of such motifs as ferns, on batik Pekalongan with repeated bouquets. This background was featured in either the kepala or badan. On kain panjang pagi sore, divided equally into different patterns and color ranges, the dense ground was applied to one of the halves. Crowded backgrounds were not a new phenomenon on north coast batiks, but in most instances there were purely repetitive. The’s freely drawn style had been a feature of commercial Lasem batiks but was then unknown in Pekalongan. In the wake of his initiative, there was an increasing use of such backgrounds on textiles produced in Peranakan Workshops.