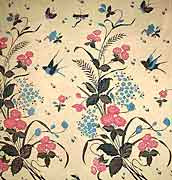 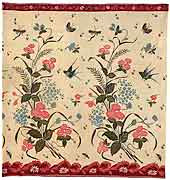 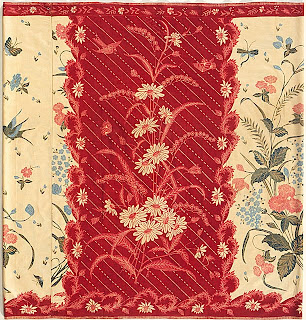 This tubular, finely hand-sewn cloth was meant for a young married woman connected with the Indo-European community who may have interpreted the flowers as poppies, redolent of summer’s harvest and therefore symbolic of the fulfillment of married life. Through the flowers are difficult to identity and may not even grow in the same season or region, their purpose is their association with things European. Therefore, the cloth might just as well have been given as a prestigious present to an affluent Peranakan bride for whom the reds and blues, the dragonflies, butterflies, and swallows would have expressed marital happiness.

In 1920 Susannah Bouwer had forty batik makers in permanent service. She did not have her own draftsman, however, and ordered designs from a man who worked for other shops as well. Without the capital to invest in a large stock of batiks, the bulk of her production was sent by train cash-on-delivery to Batavia in packets of twenty sarung. Other sarung were made to order or sold by middlemen. By 1935 the few batik makers who continued to work for her did so at home. Only the dyeing was still done at her compound.

Interned by the Japanese in October 1943, Bouwer died the following year. Among the few belongings she took to the internment camp were drawings of her batik designs. These she entrusted to her daughter, who carried them with her when she was repatriated to the Netherlands. She lost them while moving from one boardinghouse to another.

Source: Batik from the North Coast of Java