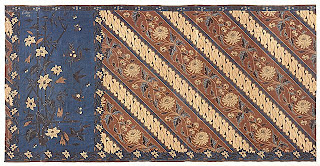 With its combination of European and central Javanese motifs and subdued color combination, this cloth is meant to be worn by an older Indo-European or possibly Peranakan woman. The chrysanthemum, flowering in autumn, is suitable for this time of life. The fragrant, white lilies, called kerklelies (church lilies) in Dutch, stand for purity and devotion. During the last quarter of the nineteenth century the simple lines of central Javanese design attracted a great deal of interest among Indo-European.

Early in her career Metzelaar signed her batiks “L Metzelaar Pekalongan,” but after she had established her reputation, around 1890, she signed them “L Metz Pek.” This is useful not only for dating her batiks but also for dating those of entrepreneurs who copied her trendsetting designs.

With a portion of a substantian legacy left by her father. The twenty-eight year old Jacqueline van Ardenne purchased Metzelaar’s workshop and house in 1918. Metzelaar then bought a house in Bandung, but after the marriage of her son, Kees, in 1920, she lived most of the time with the young couple in Pekalongan, then Yogyakarta, and finally Surakarta. She died in 1930 but was buried, according to her wish, in the graveyard in Pekalongan, where other batik entrepreneurs had been laid to rest.